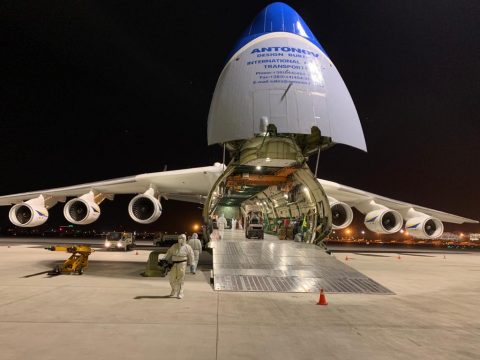 PRESS RELEASE – Antonov has transported a record-breaking shipment of medical supplies from China to Warsaw, Poland as part of the fight against the coronavirus pandemic.

On April 13, a fully loaded 13 AN-225 Mriya departed from Tianjin China Airport and flew to Warsaw with a landing on the route at the Almaty Airport in Kazakhstan for refuelling and crew rest.

The aircraft was loaded with about 100 tons of medicines, tests for laboratory analysis, medical masks and other protective equipment. The AN-225 can actually carry 250 tonnes of cargo but in this case, the maximum volume of 1,000 cubic metres was reached. It is the first time ever that an aircraft carried such a large volume of cargo.

The AN-225 Mriya was chartered by Chapman Freeborn Airchartering and has joined Antonov Airlines’ fleet performing charter humanitarian aid and relief operations in response to the COVID-19 pandemic. Since the end of March, Antonov Airlines has already carried more than 1400 tons of cargo from China to different countries in Europe, Americas and the Middle East, the company states.

“We are proud to contribute and join the fight against the global pandemic”, says Vitaliy Shost, Antonov Airlines First Deputy Director. “Planning and performing charter flights in the current difficult quarantine conditions requires selfless dedication and commitment on the part of all airline staff – from commercial personnel and ops planners in the office to pilots and technicians onboard. Therefore, I would like to thank everyone who takes part in the arrangement of humanitarian flights from China.”

The Mriya aircraft has a multitude of records to its name, including the hauling of a single-piece cargo weighing 187.6 tonnes and the record for the highest payload with 253.8 tonnes. It now also holds the record for the largest cargo volume ever transported in a single flight.