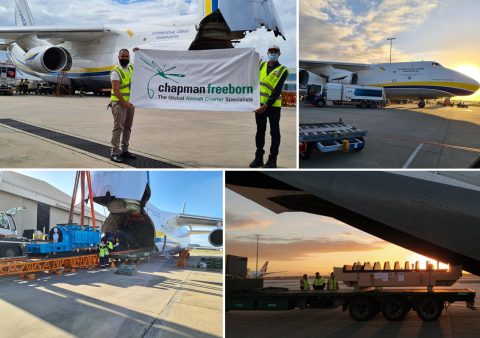 Chapman Freeborn and Antonov team up for mining job

Chapman Freeborn and Antonov Airlines have transported 370 tonnes of mining plant equipment from Melbourne in Australia to Brazil using three Antonov An-124 aircraft.

Chapman Freeborn was hired by Brazilian freight forwarder Login Aduana. “As soon as we knew we had to ship 370 tonnes of equipment from Australia to Brazil, we had no doubt that we needed a company with experience, efficiency and proactivity. We made the decision to hire Chapman Freeborn, who gave us full support in packaging, parts distribution, safe handling, scheduling and arrival”, says sales director Jose Antonio Farina of Login Aduana.

Login’s client required new parts for their mining plant in Brazil and was under a strict time constraint to get the parts in time to update their machinery. The parts were very large and susceptible to bending and breakage.

Chapman Freeborn cargo broker Ana Bocchini organised the operation with Antonov Airlines, securing three An-124 aircraft and chartering them for three separate journeys in order to transport the cargo before the deadline.

The cargo included a giant drill shaft and a transport cradle, which was required for upgrading machinery at the final destination with minimal downtime affecting operations. Antonov’s load planning engineers designed tailored frames to carry two of the pieces of equipment.

“The timeline was challenging – initially our flight plan was six days in total, however, we needed to change this to nine days after assessing the load. In the end, it came together with some meticulous planning and changing legs of the journey to avoid delays and closed runways”, Bocchini says.

The flights took place on 20th February, 26th February and 1st March, leaving from Melbourne where the cargo was manufactured and landing in Brazil, where the mining plant is located.

The Covid-19 pandemic presented some obstacles; the flights had limited crew members and had to land for frequent rest stops, rather than crew swaps taking place whilst air-bound. The journey was broken up with fuel and rest stops in Dakar, Deli, Baku, Germany, Iceland, the US and Suriname. Each rest stop entailed the crew being escorted to a hotel for approximately 12 hours for sleep and the aircraft being refuelled before the flight could depart again.

Additionally, rapid Covid-19 tests had to be conducted during each 12-hour rest window prior to the next leg of the flight being cleared to take place.

The operation was a success and the cargo arrived within the deadline, enabling the client to successfully update their machinery and keep their mining plant running safely and efficiently.