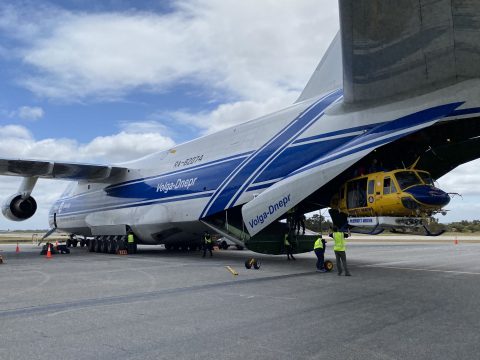 A total of six Bell 214B helicopters have recently been flown from Greece to Australia on an AN124 aircraft in an operation carried out by Chapman Freeborn, Volga-Dnepr Airlines and McDermott Aviation.

The water-bombers were initially delivered from two Australian airports to Athens, Greece to fight wildfires. For the repatriation, the helicopters, totalling 35 tonnes, were flown individually into Athens Airport (ATH) by a single pilot who landed them on the tarmac prior to them being dismantled airside and exported as IATA-compliant air cargo.

Usually exports would take place within a cargo terminal, however the Bell 214Bs’ versatility enables a level of mobility that is invaluable when dealing with complex load planning, airport coordination and constraints pertaining to the COVID-19 pandemic.

Loading onto the AN124 was executed with the help of Volga-Dnepr’s internal cranes, external equipment and the expertise of Volga-Dnepr and McDermott Aviation crew.

It is a rare occurrence and colossal achievement for 6 helicopters to be transported in one aircraft simultaneously. Despite the complexity of the operation the six helicopters arrived punctually at Perth Airport. 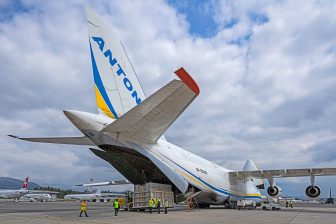