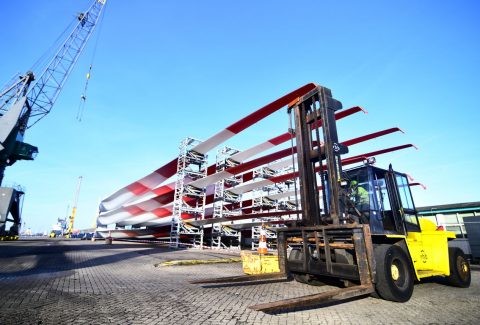 Worldwide, it is one of the most important ongoing evolutions: the energy transition. For supply chains in the breakbulk industry and for ports around the world, this transition has an enormous impact as well. With the changing climate energy transition is gaining prominence.

In a previous article in this series, trend watchers Johan-Paul Verschuure, project director at the Port and Logistics Team of management consultancy Rebel, and Hugo du Mez Advisor Business Intelligence at the Strategy & Analysis Department of the Port of Rotterdam, already concluded that the energy transition is without any doubt one of the big – if not the biggest – ‘game changers’ for the breakbulk sector.

In the latest white paper, “Huge Opportunities and Fundamental Changes: Energy Transition Transforms Breakbulk Industry“, Janet Nodar, senior editor at The Journal of Commerce together and Wilco Van der Lans, business manager Energy Transition at Port of Rotterdam, go over the consequences of the energy transition for the breakbulk market.

Both Noder and Van der Lans note that energy transition is driven by regulations and social pressure, rather than markets. Worldwide agreements have been made about reducing CO₂ emissions and reducing greenhouse gases.

“It is these regulations and targets that are creating market pressure”, says Nodar. “Climate change is the trigger. The transition is mainly driven by the social pressure resulting from that climate change. Political pressure, in turn, is a consequence of that social pressure”, states Van der Lans. “Social pressure has grown enormously over the past 20 to 25 years. Now we are really accelerating.”

Among many things discussed in the white paper, Both Nodar and Van der Lans mention offshore wind as one of the biggest drivers. The experts expect golden times for offshore wind, and everything related to it.

Wind energy was sort of a lifeline for the multipurpose sector before the current upswing in cargo demand began. Wind turbines have provided mainstay volumes for many carriers for several years now. “Wind cargo, a bellwether of the larger global transition away from fossil fuels as a primary source of energy, will only grow in importance as that transition accelerates and drives structural change to the global energy mix.”

The number of offshore wind farms is growing exponentially. Moreover, the scale of the farms and the turbines are increasing. Ships as well as facilities have to keep up with this development. On the other hand, capacity problems may arise, especially over the short or medium term, because there are not enough or sufficiently large resources to ship the ever-growing wind turbines.

Huge investments are also needed in ships for the installation of all the offshore wind farms, in feeder vessels, in the development of specialised terminals, in production facilities and so on.

Nodar notes that the outlook for project cargo tied to fossil fuel-related project is significantly more complicated, due to the nature of the cargo which typically includes expensive and long-lead procurement items. Industry players Nodar has spoken to expect a project cargo gap into 2022, due to the 2020 project CAPEX cuts and delays.

Data from IHS Markit, the parent company of the Journal of Commerce, show that the share of fossil fuels in the total global energy mix has remained stable at around 80 percent over the past 30 years, despite rising demand and thus increased production. Non-carbon-based energy’s share of the mix, meanwhile, has never reached 10 percent during this period, Nodar said.

Although oil and gas will continue as a source of significant cargo volumes for the next few decades, the long-term picture is one of declining demand. As the energy transition takes hold, fossil fuels’ share of the global energy mix is expected to slide to between 73 and 77 percent through 2030, according to IHS Markit.

At the same time, IHS Markit expects non-hydro renewables such as wind and solar power to satisfy 13 to 16 percent of all global energy demand by 2030. Given the scale of the energy industry, this modest-sounding swing of a few percentage points of market share will equate to billions of dollars annually, Nodar said.

Beyond fossil fuel- related investment and non-hydro renewables, the remaining spend will go to battery storage, biofuels, nuclear, hydro, and transmission and distribution, according to the IHS Markit report.