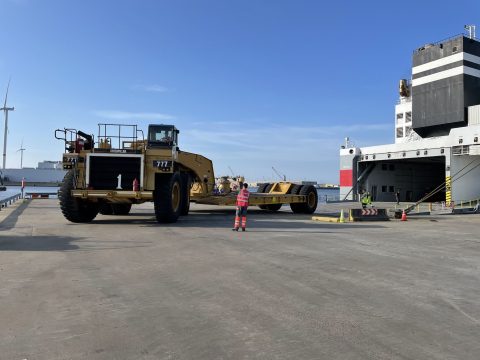 A strong shift from container and conventional shipments to shipments via RoRo, has played right into the hands of ICO Terminals that has start building its name outside its regular customer base, which has mostly been the automotive industry.

The shift has accelerated due to the dramatic increase of container rates ex Far East to Europe, combined with increasing shortage of vessel capacity. In parallel the Eastbound volumes have been booming, causing congestion in many West-European ports. Shippers have found that RoRo operators offer a multitude of destinations worldwide as well as capacity for breakbulk and project cargoes on their main decks. On top of that, the terminals where the RoRo-calls are made are not congested. The cargo shift has become a more structural move now and is there to stay.

While still minor in terms of overall throughput, the company noted that high and heavy and static cargoes are growing. “We can confirm that 25 percent of the activities of ICO in Antwerp is now related to high and heavy and static cargoes. At ICO Zeebrugge this is 10 percent and growing rapidly for both ports,” says Bruno Lamiroy, an ICO consultant.

To stay on top of this shift ICO invested in a Liebherr LHM550 shore crane in January. Main purpose of this investment is to support RoRo shipping line customers in their efforts to boost the project cargoes in the range between 70 and 140 tons. These cargoes are mainly transformers, industrial construction equipment, mining equipment, railway wagons, locomotives, but also the smaller general cargoes and breakbulk.

“The connections with our terminals happens by road, rail and via the ever growing inland and estuary barges. Our new crane is very versatile and with the automatic container spreaders we can handle all type of containers as well,” said Helmut Walgraeve, project manager at ICO Zeebrugge, noting that the intention is for the crane to be working as much as possible to maximise the ROI.

ICO Terminals‘ facilities have been designed in such a way that they can be adapted on very short notice for different kind of businesses. The ground bearing capacity ranging from minimum 10t/m² to an area of 14ha with 50t/m² is much higher than the requirement for cars.

“But it gives all the flexibility and has been proven right when we have transformed parts of the terminal to accommodate the modules and heavy breakbulk of the Yamal-project or for the US Army,” says Walgreave.

The recent high rates have pushed shippers to embrace the potential as well as the efficiency of the RoRo industry. “Many of them will continue to use RoRo for the shipment of their goods. At the same time it is important to be conscious about the consecutive number of crises that have struck our working environment (Covid, Brexit, ship shortage, geopolitics, etc) and might continue to do so. It is therefore of utmost importance to spread our risks into compatible diversification,” he said.

Looking ahead, ICO Terminals expects to see more demand coming from extended service packages towards the automotive sector, but also the renewable energy sector and high and heavy machinery. “We expect our combined terminals in Antwerp and Zeebrugge to become a global turntable for the construction, agricultural and mining sectors,” adds Lamiroy.

Walgreave stressed that versatility and flexibility are growing in importance and is an advantage for ICO, especially when all flows and activities are managed via one single and multifunctional IT portal. ICO facilities are already well prepared for the future and its Terminal Operating System controls successfully all traffic-and cargo flows into the most minor detail. These systems are continuously adapted to the needs of the changing core business but is also being adapted to other cargo flows such as breakbulk, steel, and project cargoes.