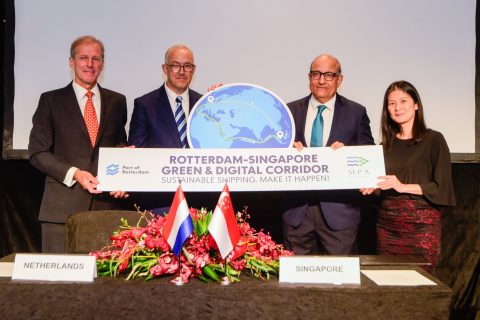 The Maritime and Port Authority of Singapore (MPA) and the Port of Rotterdam, have signed a Memorandum of Understanding (MoU), establishing the world’s longest Green and Digital Corridor.

This green digital corridor will facilitate low to zero carbon shipping, between the two major maritime cities of Singapore and Rotterdam, the world’s second and tenth largest container ports respectively.

Both the port authorities of Singapore and Rotterdam will foster collaboration between stakeholders across global supply chinese, with as a common goal, to create and implement the first ever sustainable vessels sailing route, in the next five years. Added benefits of such a route include optimised maritime efficiency and safety, as well as a more transparent flow of goods, thanks to digitalisation.