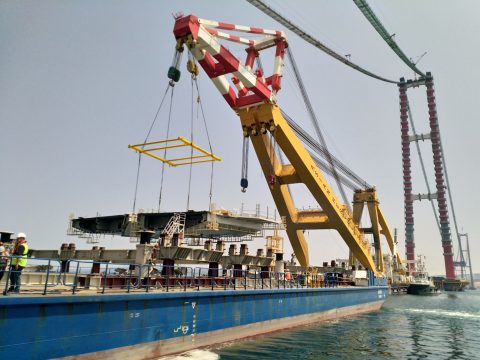 The dredging and heavy lift specialist, Royal Boskalis Westminster, has recently been busy at the construction site of the longest suspension bridge in the world. The company’s floating sheerleg crane, Asian Hercules III has been lifting section pieces for the bridge spanning the Dardanelles strait.

Boskalis informed in a brief statement that Asian Hercules III lifted and installed sixteen bridge sections for the Çanakkale 1915 Bridge in Turkey. For these lifts the Asian Hercules III had to be positioned in between the bridge cables with minimal maneuvering space.

The preparation for the project team and engineers in terms of performing motions studies, developing anchoring plans and contingency scenarios paid off and resulted in the safe and successful execution of the sixteen lifts. Previously Boskalis secured a contract to execute a part of the lifting operations, a float-over scope to install the tie-beam and deliver a part of the vessels for transport and installation of the foundation caissons.

The 1915 Çanakkale Bridge, also known as the Çanakkale Strait Bridge, is a suspension bridge being constructed in the Çanakkale area in Turkey. The bridge will span the Dardanelles strait, about 10 km south of the Sea of Marmara.