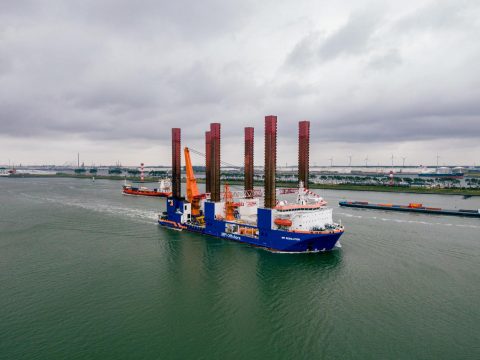 Van Oord’s offshore installation vessel MPI Resolution will commence its work for the Taranto Offshore Wind Farm in Italy. The vessel has set sail from Rotterdam to Italy.

Van Oord noted that the MPI Resolution has set sail to Italy to carry out the installation the monopiles, secondary steel and the wind turbines generators. The mobilization was prepared in the last two weeks in the Rotterdam area, taking a variety of equipment on board including a Menck hammer, sea fastening, upend tool and lifting equipment. ​​The vessel has been selected for the works in the Mediterranean Sea because it can handle both the very shallow and deeper water locations as water depths vary from 4 to 18 metres.

Van Oord signed a contract with Renexia, a unit of Toto Holding, for the transport and installation of the 10 foundations and turbines. The turbines will be provided by Ming Yang Smart Energy.