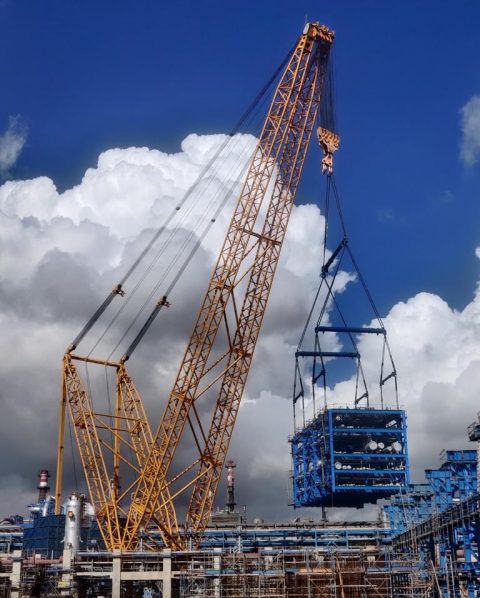 Sarens crane picked for super-heavy lifts at an Indian refinery

An SGC-120 crane has been shipped from Newcastle in the United Kingdom to the Kakinada port in India and later on to the site of the HPCL refinery in Andhra Pradesh. There, the crane will be deployed to perform a series of super-heavy lifts, including five LC MAX reactors weighing 2,210 tons and four other similar reactors.

Sarens noted that the crane was hired by client L&T Hydrocarbon Engineering and will remain on site for just over seven months, including assembly and disassembly. Its deployment will enable HPCL to modernise and expand the Vishakhapatnam refinery while nearly doubling its production capacity.

The crane was sent from New Castle, UK to Antwerp, and then on to Kakinada port in India. The ship sailing off from Antwerp coincided with the blockage of the Suez Canal, representing a major challenge to the timely delivery of the crane. Another challenge, raised by ongoing pandemic conditions, was mobilising an international crew for the SGC-120 crane.

The crane has been specially reinforced and prepared to lift extremely heavy loads. In addition to the reactor lifts, the SGC-120 will be lifting some of the heavy pipe rack modules on site for which special lifting arrangement has also been designed and provided by Sarens.