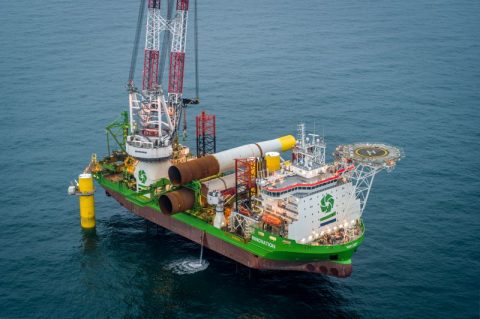 Bart De Poorter, General Manager DEME Offshore Renewables, stressed that the 165 foundations have been transported and installed in just one year.

“DEME’s logistics and engineering teams have put in an extraordinary performance. They had to ensure a continual flow of components which were transported from three different fabrication ports to the base port in Eemshaven in the Netherlands. The heaviest piles weighed around 1,250 tonnes and had a diameter of 9.5 metres, therefore DEME Offshore’s engineers designed specialist equipment to make the installation process as efficient as possible,” Bart De Poorter said.

As well as the transport & installation scope for the turbines and foundations, two of DEME ’s fallpipe vessels carried out the scour protection at 89 locations.

Located approximately 89 km off the Yorkshire coast, Hornsea Two will generate up to 1.4GW of clean energy for UK households when fully operational in 2022.

Hornsea Two is the third offshore wind farm project where DEME Offshore has been responsible for the installation of more than 100 foundations.