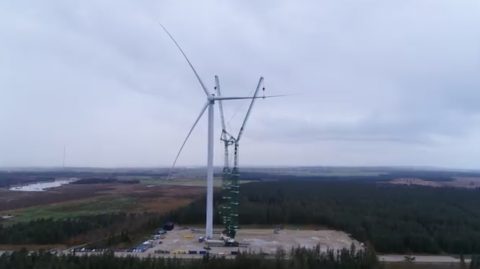 Siemens Gamesa’s SG 14-222 DD wind turbine has been assembled at the test site in Østerild, Denmark. The SG 14-222 DD prototype has been fully installed and is ready for commissioning. The turbine will be thoroughly tested to prepare for commercial installation in 2024.

The onshore assembly make it easier to perform measurements, services and adjustments before the turbines are placed offshore. Project cargo for this prototype has been delivered from various production facilites in Denmark. The 500-ton nacelle left Brande in early October.

The latest addition to the prototype have been the B108 blades with a length of 108 metres and weight of 65.6 tonnes per unit. The transport of the largest wind turbine blades in the world has been handled by Blue Water Shipping. They have been transported onboard the Symphony Provider from Aalborg to Hanstholm.

The blades were moved from Hanstholm to Østerild by BMS and Torben Rafn, using the Goldhofer PST/SL-e system to manouver through the roads. Siemens Gamesa

Siemens Gamesa has rolled out the first of the B108 blades during the first quarter of 2021, and subsequently started assembling one of the turbines at the test site in Østerild. The the SG 14-222 DD prototype has been erected at the site in September this year and the 500-ton nacelle that left Brande, Denmark in early October has already been installed. The unit has a capacity of 14 MW and up to 15 MW with Siemens Gamesa’s Power Boost.

The turbine’s 39,000-square-metre swept area is equivalent to approximately 5.5 standard football pitches. It allows the SG 14-222 DD to increase annual energy production by more than 25 per cent compared to the SG 11.0-200 DD offshore wind turbine, which currently is the company’s largest offshore turbine.