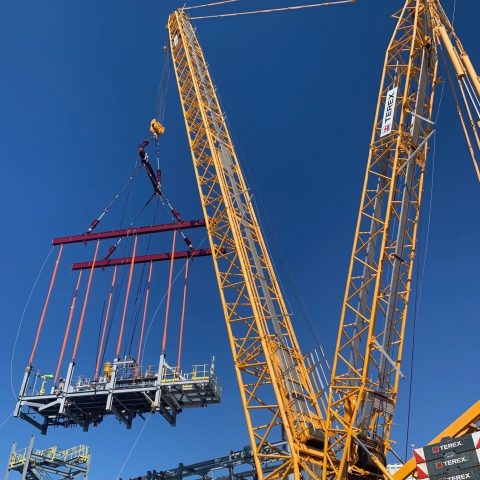 Deep South crews were hired to haul, lift, and set 84 modules, including three towers, one measuring around 30 metres long, weighing around 150 tons, as well as various pieces of process equipment, such as piping, tanks, PDC buildings, and transformers—all within a tight schedule. Many of the modules had offset centres of gravity further complicating the lift and set. The work has been completed for an unnamed client overhauling its process plant.

Conventional methods would have required using multiple sets of rigging with different length slings and several shackles to level the modules. The rigging then would have been disassembled and reassembled, making small adjustments in sling lengths or number of shackles, for every new lift, a complexity that added too much time to an already tight schedule.

In the first phase, over the course of one month, Deep South transported and set 35 modules using 18-axle-line Goldhofer trailers, 18-axle-line Scheuerle SPMTs, and a 440-ton Terex-Demag CC-2400-1 crawler crane. The second phase relied on a 660-ton Liebherr LR-1600/2 crawler crane to move and set 49 modules over the course of two months. Each phase relied upon Deep South’s Module Lifting System as the rigging.

Thanks for Sharing article about Hydraulic Powerpack. Here, Hindustan – One of the Leading Hydraulic Power pack Manufacturers in Chennai, They’re engaged in offering a comprehensive range of Hydraulic Power Pack to the Customers. You can mileage these products in different specifications from Them. Call 9840921885 to get Latest Offer Prices.