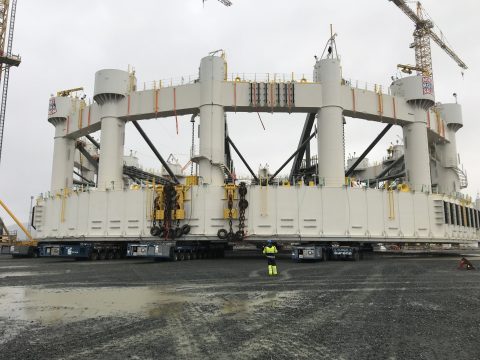 Sarens has completed the installation of the first sea cage at the Norway Royal Salmon`s (NRS) Arc­tic Offshore Farming project located in the remote areas north of Tromsø in Northern Norway.

NRS has developed the technology for sustainable salm­on farming. This will enable the use of more weath­er-exposed locations than is possible with the currently available technologies. To enable this initiative large fish cages are designed to operate in remote, exposed areas and can withstand a wave height of up to 13 meter. The NRS Arctic Offshore Farming facility will consist of two cages, each cage having a diameter of 80 meters with a height of 22 meters. Together, the two cages will hold 1.2 million salmon.

The cage was built in half-rings in Germany and transported to Verdal and Sarens was awarded the contract for load-in of four half-rings from the incoming barges from Germany and load-out of two complete fish-farms. Each half ring weighed around 1,800 tons. Load-in was conducted on four trains of Kamag K24 SPMT’s, to­tal of 56 axles lines. Each complete fish-farm had a dry weight of 3,820 tons and was loaded out on 12 trains of SPMT’s with a total of 120 axles lines SPMT’s.

The four load-ins were performed this spring and summer. First load out was executed this past September and the second cage was loaded-out in October under sub-ze­ro temperatures. Load-out was performed on two barges connected side-by-side due to the enormous width of the cage after which the barge left the quay to submerge in deeper water to its final destination.