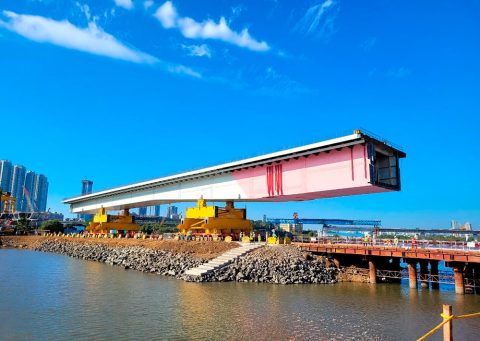 Express Global Logistics (EXG) recently transported an Orthotropic Steel Deck, weighing 1,362 tons for the Mumbai Trans Harbour Link project. It was the first of 30 such movesfor EXG on the $2.4 billon infrastructure project, one of the largest in India.

Once completed, the Mumbai Trans Harbour Link, also known as Sewri Nhava Sheva Trans Harbour Link, will be the longest sea bridge in India at 21.8 kilometres. The argo for the project was moved at the Heavy Civil Infrastructure IC site, Sewri, Mumbai.

The first of the 30 pieces of cargo was moved from the manufacturing units assembly line to Kerosene Jetty and the load transfer at the jetty was done from SPMT to skid chair car. Express Global Logistics has been involved in the project since the early stage and had to implement the move within two days,

The team coordinated the transportation by factoring in high tide that happens only twice a month at this jetty for smooth roll on and roll off movement.

Subsequently, Times of India reported that the pre-fabricated steel deck was launched over the foundation pillars in an operation that took 10 hours to complete. A total of 68 of the earthquake-resistant OSDs will be launched during the span of the project.