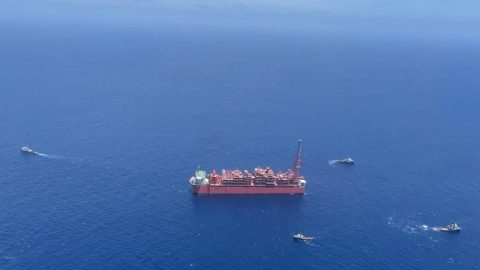 Heavy lift specialist Sarens has played its part in the development of the floating liquefied natural gas project off the coast of Mozambique. Sarens was on-site in Maputo to perform and assist on load-out of mooring heavy chains and reels for the Coral FLNG project at Area 4.

The floating LNG facility, named Coral-Sul FLNG, has a capacity of 3.4 million tonnes of LNG per annum and is scheduled to begin production in 2022. This will be the world’s deepest FLNG facility with wells drilled nearly 2000 metres deep, Sarens noted. Six wells in total will flow into the liquefaction unit.

Led by Italy’s Eni, the project agreed to sell 100 percent of its capacity to bp and subsequently reached the final investment decision on the project. Besides Eni, other project partners include CNPC, Galp, Kogas, the Mozambican state company ENH and Exxon Mobil.

The FLNG unit was built at the Samsung Heavy Industries yard in South Korea. The FLNG unit has arrived in Mozambique at the start of the year.

Sarens deployed its CC1100 after careful swing test during the planning phase. The CC1100 crawler crane was selected with the LH configuration, 7,25 metre tracks, 80-ton counterweight, and 42 metres main boom for a 24-hour operation. A special hook block with 250-ton capacity was mobilised from Belgium for this operation. The remaining equipment was already present at the Maputo Port for a recently completed project.

Mooring chains weighing 106,1 tons, 112,6 tons, and 133,6 tons had to be lifted out of a 4 metre high basket. Along with the mooring chains Sarens had to lift around 50 cable reels weighing about 59 tons.