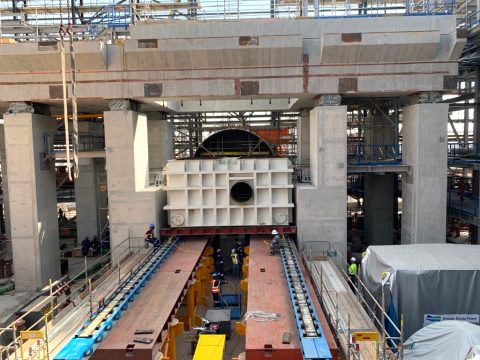 Specialist for heavy lifting, heavy transport and energy solutions, Al Faris, was recently contracted to install a steam box at a new waste-to-energy plant in Dubai.

This challenging installation was done at a height of 2.8 metres using Al Faris’ specialised in-house modular towers and other skidding equipment.

A major challenge for the operation was the fact that the clearance while skidding was only 30 millimetres. All measurements and markings were done precisely during the operation. The COG of the top part of the steam box was away from both the lifting points during the lifting of the load from the trailer which could have caused the load to slide. In order to avoid this situation, Al Faris made a temporary packing arrangement of stools at the corner of the steam box.

A project of this nature requires exceptionally detailed planning to orchestrate the complex activities necessary for ensuring uninterrupted safe services; from detailed planning to ensuring utmost safety during all lifts. The technical support documentation, execution plans and HSE protocols were prepared in-house and discussed with the client prior to project execution.