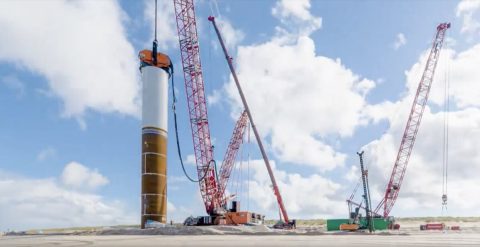 The last of twelve wind turbine monopiles, the steel tubes driven into the sea bed, were installed by Ballast Nedam, on the soft seawall of ‘De Tweede Maasvlakte,’ for the wind-turbine park. This park is currently under construction by Mammoet and Eneco, on behalf of Directorate-General for Public Works and Water Management (Rijkswaterstaat).

The monopiles, measuring 5 metres in diameter, act as the foundation for 12 of the wind turbines of the wind park. Ballast Nedam will continue working on the 10 turbines to be located on the dike, beginning with their foundations.

Upon completion the wind farm will generate over 100 megawatts of power for Rijkswaterstaat. Annually, the 22 onshore wind turbines are designed to generate 416 GWh of green electricity annually. Thanks to this, the entire Dutch Ministry of Infrastructure and Water Management should be energy neutral as early as 2023.