The Dutch company Wagenborg Nedlift, has been working on the Churchill Bridge, a drawbridge with steel decking, for Solidd Steel Structures, a mechanical engineering firm based in Sumar, Friesland. Churchill Bridge has now been completely renovated. To do so, Wagenborg had to get creative with component transportation.

The Churchill Bridge over the Oude Rijn, a branch of the Rhine Delta, connects Leiden’s southwest to the Morskwartier neighbourhood. The bridge is also part of the busy provincial road N206, which connects the A4 and A44 motorways. Because the bridge was first opened in 1984, a major overhaul was necessary by the summer of 2020. Renovation work thus began on the bridge on July 20th and was expected to last a month. The summer months were also chosen as a time frame, to keep traffic delays to a minimum.

The Works on the Churchill Bridge consist of replacing the movable part of the bridge, the steel superstructure, the electrical installation and the drive system. The old bridge sections, including the towers on which the balance with ballast weight and hanging rods are mounted, were lifted out with Wagenborg cranes. They were then cut into pieces by another party and removed from the road surface. A special feature of this work was the transportation of the new bridge deck. Subsequently, foundations and new overlays were made. With precise hoisting, the new deck, measuring 11 by 17.5 metres and weighing just under 120 tons, could be installed. 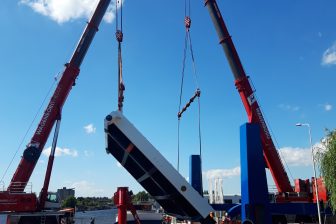 ‘But,’ says Bert Top of Wagenborg Nedlift, ‘the new deck was too large to transport on a pontoon. The passages to get there are simply too narrow. We had to come up with another solution.” A solution had to be found, to enable safe transport from Sumar in Friesland via Lemmer over the IJsselmeer and then to Leiden. Top adds: ‘We made the plan to place the bridge deck at an angle in an inland vessel, while it leaned on steel flaps, comparable to bookends.’

With precise hoisting, the deck was neatly lifted into the ship. The deck, placed almost upright in the ship, works as a sail. “We, therefore, had to cross the IJsselmeer in calm weather.” But because Top could not predict the weather, he calculated with a time margin of three days. “We could get there in three days, but calculated six days for it. Fortunately, in hindsight, we didn’t need those extra days.”

After the safe arrival of the deck, the finishing touch took place in Leiden. Two cranes were used to lift the deck out of the ship and placed it horizontally on the support points. Then the hammer towers and balancing parts were lifted into place and assembled by Solidd Steel Structures. About this original transport solution, Top says, “The more impossible the task, the more we feel challenged.”