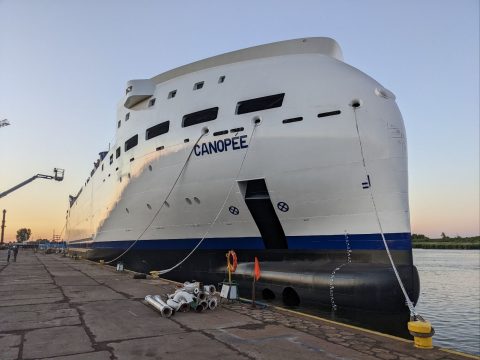 Neptune Marine Services, and the French marine contractor groups, Jifmar Offshore Services, and Zéphyr & Borée, known together as Alizés, have collaborated in the creation of the world’s first sailing cargo vessel Canopée, now in its outfitting phase in Poland. Once operational, it will transport elements of the Ariane 6 launcher to French Guiana.

This green cargo vessel, currently still under construction, was designed in collaboration between Neptune Shipyards, in Hardinxveld-Giessendam, and Partner shipyards in Szczecin Poland. The construction of the hull, which began in February 2021, is now complete, and the vessel was launched last week in Szczecin. It will now enter the outfitting phase. This will be carried out first in Poland, then in the Netherlands. Delivery of the vessel is scheduled for the end of 2022 after various tests.

Once finished, the Canopée measures 121 metres in length, with a 22-metre beam. It has a draft minimum of 3,8 metres and a maximum of 5 metres, while its maximum air draft is 49,5 metres. Its tonnage will be 10640 tonnes, while its deadweight will be 4700 tonnes. For cargo loading and unloading, the Canopée disposes of an aft ro-ro ramp (13 x 14 m, 200 t) and a gantry crane (60 t SWL). The main deck surface will be 1590 square metres, and the height over the main deck will be unlimited, thanks to an open hold.

What is most unique about this vessel is that its mechanical propulsion systems will be complemented by four articulated propulsion wings, with a surface of 363 square metres each. These Oceanwings will be delivered by the company Ayro and will reduce the vessel’s fuel consumption by 30%, and reduce emissions by 35%. With sufficient wind, it will also be possible to put the controllable pitch propellers in feather-mode and shut down both, or one of the two Wartsila main engines. To further reduce the carbon footprint of transportation, the Canopée will also be endowed with a weather routing system developed by the French company, D-Ice Engineering.

Also unique, will be the Canopée’s cargo. This ship is dedicated to transporting the future Ariane 6 launcher from the European continent to French Guiana. The ship’s structure is specifically designed for the containerised sections of the Ariane 6. The space group chose the Alizés project following a call for tenders launched in 2017. The ship has the merit of meeting other fundamental requirements, including that of a very shallow draft to enter the Kourou river and dock at the space centre’s pontoon.

The Canopée will load components of the Ariane 6 launcher in Bremen, Rotterdam, Le Havre, Bordeaux and Livourne, when delivered. The Ariane 6 is the sixth generation of European launchers, which have launched satellites for decades from the Kourou launch site in French Guiana. The Ariane 6 flight is planned for the second quarter of 2022. After this, Alizé will continue to operate the vessel between Guiana and Europe for the next 15 years.