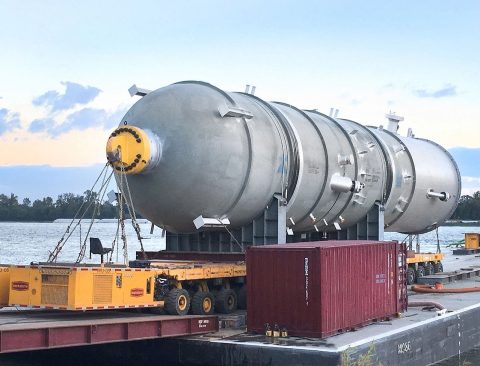 The American company, Deep South Crane & Rigging, handles the transport, placement, lifting and installation of a refinery column weighing nearly 252 tonnes, or 27 tonnes heavier than the Statue of Liberty.

The refinery column has a length of 147 feet, or just under 45 metres, and a diameter of 23 feet 10 inches (nearly 7 metres). In addition to the column’s considerable weight and size, Deep South had to manoeuvre around existing systems and racks. The column was first lifted horizontally over the pipe racks, then tailed up to a vertical position.

After being transported to the refinery’s roll-off site via barge, a Scheuerle 16-line double-wide was used to bring it to the lift location. The Deep South crew then manoeuvred a VersaCrane CC-9600 into position, which presented a challenge, due to lack of space.

Steven Gouner, a project engineer at Deep South, stated, “The setup location for the 750-ton VersaCrane CC-9600 was tight since it was built in a unit being constructed that was completely surrounded by existing 40 foot (12 metres tall pipe racks. Real estate in the unit was scarce.”