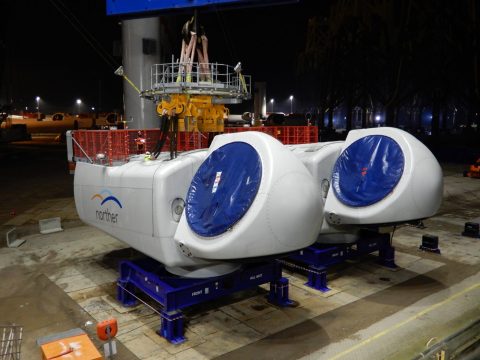 Van Oord is currently constructing the Norther Offshore Wind Farm off the coast of Oostende in Belgium, which will feature 44 wind turbines with a power output of 8.4 MW each. Those are among the biggest currently available on the market. Van Oord used the synthetic slings to lift monopiles, transition pieces and turbines for the project.

According to Cortland, their synthetic rope slings increase safety and save time in comparison with conventional wire rope. The order for the Norther wind farm was the largest of the company to date. The lifting and rigging equipment included seven Selantic slings of 20 metres, 40 metres and 60 metres, with respective capacities of 2,500 tonnes, 1,900 tonnes and 2,000 tonnes, and three Plasma grommet slings.

Cortland’s European sales leader, Wilco van Zonneveld, said: “Delivering one of our largest orders to date was an exciting challenge taken on by the team. Being part of Norther Offshore Windfarm, one of the key infrastructure projects currently under development in Europe, allowed us to once again prove the capabilities of high-performance synthetics at scale.”

Synthetic slings and chains are slowly winning territory in the heavy lift industry. According to Zonneveld,  synthetics are currently being used on wind farms at North Sea sites in Belgium, the Netherlands, Germany and the UK. “Reducing risk during lifting operations is a critical priority across industries, including construction, oil and gas and renewables,” he says.

Cortland’s slings are made from “high-performance materials” as Aramid and High Modulus Polyethylene (HMPE), which according to the manufacturer, provide qualities like strength, durability and low weight. Additionally, the synthetic fibers are easier to handle as they do not cause damage to painted surfaces through abrasion.

Some of those high-performance synthetic materials can be eight times as strong, weight for weight, as traditional steel wire rope. Cortland is not the only company pushing synthetic materials into the market. DSM has set up an affiliate called Dyneema, which claims to have manufactured the ‘strongest fiber” yet.