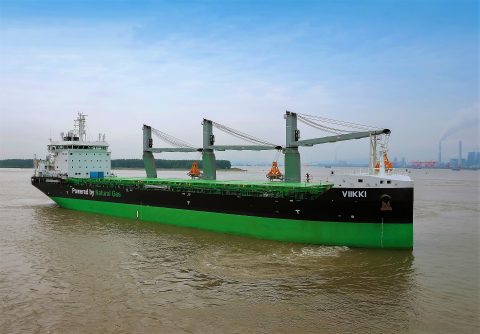 ESL’s new LNG-powered flagship bulk carriers were unable to operate as planned during the first quarter due to serious technical issues with the cranes. According to the company’s parent Aspo Group, these problems are now fixed by the crane manufacturer, Cargotec MacGregor.

Aki Ojanen, CEO of Aspo group, said “the new vessels LNG-fueled vessels were disappointments” as their cranes remained inoperable throughout the first quarter. At the end of the review period, Cargotec MacGregor, the crane manufacturer, announced that it had mainly returned the cranes operational.

ESL’s two “eco bulkers” Viikki and Haaga are described as the world’s most eco-friend bulk carriers. The vessels were delivered to the company in August and September last year and sailed from their construction yards in China to Europe via the Northern Sea Route.

Despite the problems with the new vessels, ESL Shipping increased its sales and operating profit in the first quarter of 2019. The growth was driven by higher transportation volumes and the earnings of the acquired Swedish shipping company AtoB@C. The acquisition of the multipurpose vessel operator was finalised in September 2018.