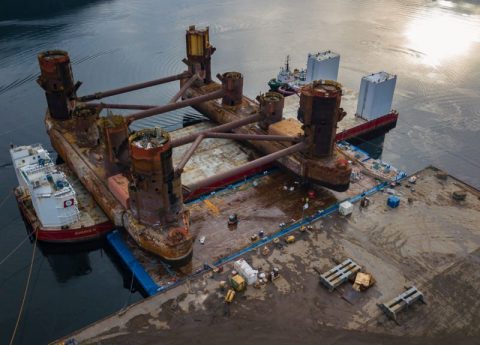 ALE Heavy Lift is expanding its Scandinavian operations with a new office in Sweden to provide civil engineering solutions. The move follows after the signing of a new contract worth USD 529 million to install the Hisingsbron bridge in Gothenburg.

The installation of the new bridge over the Gota river will be the branch’s maiden project. It will replace the existing Göta älv bridge on Sweden’s west coast, whose maintenance costs would become too high. Work on the vertical lift bridge is expected to be finished in 2022.

The new office is ALE’s second branch in Scandinavia. In 2011 the company opened a location in Stavanger, Norway which according to the company has seen rapid growth since 2016 thanks to large decommissioning projects. “In fact, through this branch ALE has executed the largest site moves and load-outs of offshore modules to take place on the Norwegian continental shelf,” the company states.

The work in Norway included the load-out of key modules for several North Sea oil platforms and the company also supported a number of recent decommissioning projects there.

During work to decommission the Janice platform, ALE performed load-in of its 7,000 tons floating production unit (FPU) using 300 axle lines of SPMT. The company also contributed significantly to the Johan Sverdrup project, throughout two years performing weighing, jacking, SPMT moves and load-outs for a range of modules from 800  to 3,000 tons.