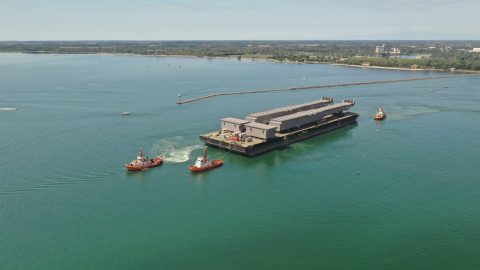 Swiss-based offshore contractor Allseas is upgrading the the heavy lift capabilities of its construction behemoth Pioneering Spirit with a jacket lift system.

The company noted that Pioneering Spirit, the largest construction vessel in the world, has revolutionised platform installations and removals with single-lift technology. The vessel’s capability and versatility will be further enhanced with the new jacket lift system.

Integral to the system are two 170-m hinged beams with integrated tail extensions, which lift and support jacket structures during transport and installation and removal operations. Each as long as one and a half football pitches and equal in weight to the Eiffel Tower, the beams are the largest S690 steel grade structures ever built!

After a two-and-a-half-year build time involving more than 1000 people across four fabrication sites, the beams and tail extensions are complete and loaded onto Allseas’ cargo barge Iron Lady for transport to Rotterdam, where they will be installed on Pioneering Spirit next month.

Built to install and remove entire jackets up to 20,000 tons in a single lift and able to operate in hostile weather conditions, Allseas claims its new technology offers a safer and faster alternative to conventional systems.