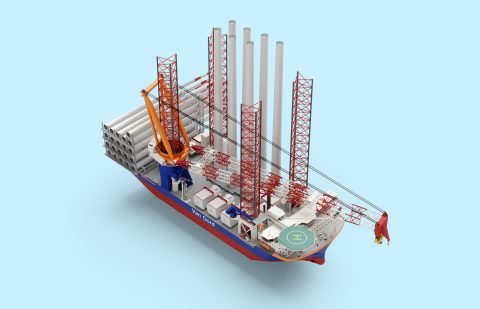 Van Oord has made additional moves to further strengthen its position in the offshore wind market with the order of a new offshore installation vessel capable of installing up to 20 MW wind turbines. The jack-up vessel is also featuring emissions reduction technology as it will operate on methanol. The investment is in line with the increasing global demand for offshore wind farms, Van Oord said in a statement on Friday.

The new 175-metre offshore installation vessel will be purpose-built for the transport and installation of foundations and turbines at offshore wind farms. With a Huisman crane it will be capable of lifting more than 3,000 tonnes. The vessel has an advanced jacking system. Four giant legs, each measuring 126 metres, allow the vessel to be jacked up and work in waters up to 70 metres deep. This is part of a €1 billion fleet investment programme over the next 5 years. In December 2020, Van Oord had already ordered a new green cable-laying vessel at VARD in Norway.

The vessel is being built by the Yantai CIMC Raffles Shipyard in China. The design is by Knud E Hansen. Components such as the Huisman crane and other technical systems are delivered to the yard by the various suppliers and integrated on site. The ship is expected to enter the market in 2024 and will work under the Dutch flag. Van Oord has also taken an option on a second vessel.

The new installation vessel will be able to run on the future fuel methanol. Running on methanol, reduces the ship’s CO2 footprint by more than 78 percent, the statement reads.

In addition, the vessel will be equipped with an advanced active emissions control technology (Selective Catalytic Reduction) to reduce the NOx emission to an absolute minimum. An installed 5,000 kWh battery pack can take the peak loads and regenerate energy to reduce the fuel consumption (and corresponding emissions) even further.

In the Netherlands, the goal is to realise 20 GW up to 2030 and another 20 GW of offshore wind energy in the next decade. Wind turbines at sea are also rapidly getting bigger. In 2002 there were wind turbines of 2 MW, nowadays turbines of 14 MW are installed. The rotor blades are already well over a hundred metres long and the transport and installation requires larger ships. Van Oord is investing in a new vessel to transport and install the next generation of 20 MW wind turbines.