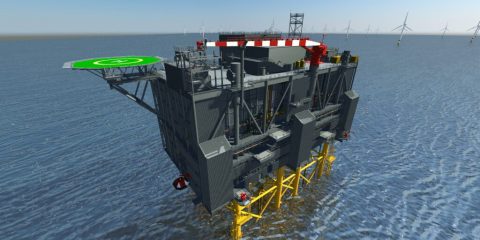 KenzFigee’s electric hydraulic Ram Luffing offshore crane has been ordered for installation on the HVDC offshore converter platform for Sofia Offshore Wind Farm, to be sited on Dogger Bank in the North Sea. The contract was signed with Iv-Offshore & Energy.

The company noted that the heavy duty 3,000 type Ram Luffing crane is suited for harsh North Sea offshore operations. The crane is equipped with a 40-metre long box boom which enables personnel handling and supply boat lifts of up to Hs-5m, according EN13852-1, and platform lifts with safe working loads from 19 to 25 tonne.

The Ram Luffing crane will be built, assembled and tested at KenzFigee facility in Zaandam, the Netherlands. In the first quarter of 2022, it will be shipped to Batam, Indonesia where Sembcorp Marine will install it on the HVDC (High Voltage Direct Current) offshore converter platform being fabricated for Sofia Offshore Wind Farm.

The 1,400 MW Sofia Offshore Wind Farm, consisting of 100 wind turbines, will generate enough energy to power 1.2 million UK homes and will be one of the largest offshore wind farms in the world when completed. Located 195 km off the North East coastline of the United Kingdom, it will also be one of the farthest from shore. 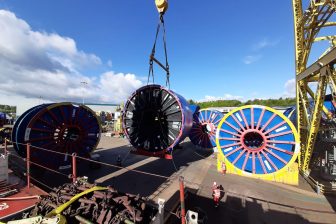