The Dutch logistics company, XELLZ, has obtained a patent on ReelFrame™ technology, which they developed to transport heavy cable drums or reels without using cranes. A prototype has also been manufactured.

The cable drum transport concept is to remove lifting requirements, with the exception of lifting in and out of vessels. According to XELLS, cable drums up to 100 metric tonnes would no longer need to be loaded with a crane. This lowers operating costs and turnaround time while increasing safety. Project requirements are now involving longer cables, reaching weights that are challenging to offload, without large cranes, which do not always fit on a construction site.

The frame can be unloaded by decoupling it from the trailer parts. This takes place after lowering the frame. Unloading can be achieved without using more space than the area already covered by the truck, trailer, and frame. The frame adapter is connected to the frame by a keyhole, and lock. When it is connected to the trailer end, it drives towards the ReelFrame™ and the height can be modified by the multiple-axle trailer hydraulic system. By bringing the trailer upwards, the frame pins slide into the pinhole locking to the adapter. It can then be transported. ReelFrame™ is also equipped with GPS and GPRS tracking, shock absorbers and cable consumption sensors. 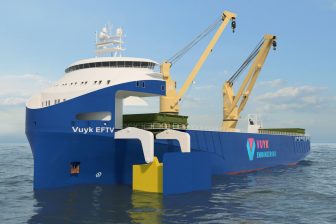