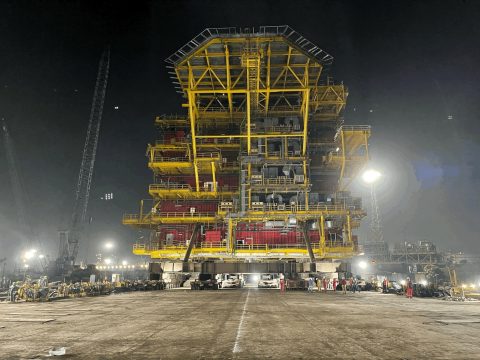 LSPL carried out the planning to complete the load-out of the seven modules on six barges of 330 and 400 class within a time frame of 20 days as missing any of the loadout dates would disturb the offshore schedule. The operation involved preparation of axles in desired format 5 file / 6 files, preparing the barge with pre-loadout ballast and then loading the modules onto the barge during the rising tide.

The first module preparation commenced for the East Module weighing 4,432 tons which were to be shifted on 10 files of axles totalling 188 axles. The journey from MFF2 yard to MFF1 yard was over 1 kilometre long after which the module was rolled onto the barge. The module with a width of 52 metres, is the widest module transported by the company. The second module, the West deck, weighing 3,700 metric tons, was loaded using 8 file axles totalling 160 axles. Both East and West module were of the same width.

The challenging aspect was to arrange the loadout of the 3rd, 4th, and 5th module (FFSDO, LSW, and TG), which required the axles to be reconfigured with only two days between the load out dates, the company said. The tight schedule was due to the suitable tide for the FFSDO and LSW which were loaded on the same barge.

The final module loadout was the living quarter module (LQ), a “7-story building” weighing 4,532 tons, the heaviest load out handled by Lift & Shift in India. The LQ module movement from the fabrication yard to the jetty involved manoeuvring a “hairpin” turn and with limited space for 60 metres length of axles and 30.5 metres width of axles. The module was transported from yard to jetty in two & a half hours, and the roll-on onto the barge was completed within an hour.

Lift & Shift’s team was involved in planning from bidding and pre-fabrication stage to optimise operations.