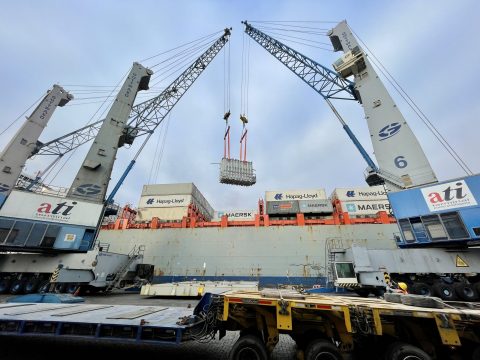 A three-phase over-dimensional power transformer weighing 135.2 tonnes recently made it across South America to Chile’s Atacama desert. Delivered by UTC, the unit was manufactured in Brazil and following a delicate discharge it will now be installed in a substation that is part of a large solar plant project in the region.

The transformer measured 840 x 360 x 495 centimetres, and also included in the transport were accessories, spare parts, and oil, packed in 8-40′ containers. The cargo was shipped as breakbulk on a container vessel.

UTC used a Gottwald mobile harbor crane with tandem lift to discharge the cargo from the vessel. The oversized transformer was hoisted and loaded onto a drop deck 12-axle Goldhofer modular trailer. Additionally, police escorts and road permits were critical in moving the heavy cargo.

The move involved a heavy haul of the unit from the destination port to the final job site and placing it onto the foundation. An Enerpac jack and slide system, under the supervision of the UTC team, was used to complete this part of the job.

Planning made this heavy haul possible

A route survey was conducted to ensure roads and bridges could accommodate this oversized load. The discharge of a heavy transformer is a delicate process, and swells at the port can hamper operations. Due to frequent swells occurring at the destination port, careful planning and monitoring were necessary to ensure the discharge took place at just the right time to minimize risks.

Introduced in 2015, Chile’s Ministry of Energy announced its Roadmap to 2050: A Sustainable and Inclusive Strategy, which plans for 19 percent of the country’s electricity to come from solar energy by 2050. With the Atacama Desert possessing some of the most extensive solar power capabilities in the world, there are a number of additional projects under construction in the region, with many more planned.