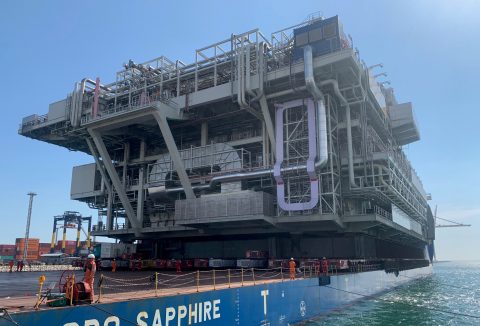 Constructing Equinor’s infrastructure at the Johan Sverdrup field required the construction and installation of some large and heavy structures. One of these structures, the main support frame (MSF) module is now part of the Equinor’s fifth platform for the Johan Sverdrup oil field. The 16,258-ton structure was constructed at Aibel Thailand’s yard in Leam Chabang and required 604 axle lines of SPMTs to load out the structure onto a vessel.

This module was the largest ever fabricated by Aibel Thailand and the largest to be loaded-out in Thailand using SPMTs. The mega MSF module weighed approximately 14,500 tons, and 16,258 tons with grillage.

The 604 axle lines of SPMT and 21 PPUs were sourced from various depots in Asia-Pacific, Africa and the Middle East. It was a logistical challenge due to COVID-19 restrictions, which complicated shipping schedules. Nonetheless, all equipment was mobilised on time, and all trailers were assembled weeks before the load-out took place.

On site, weighing of the MSF module was completed using Mammoet’s weighing system. Once the load cells were removed, the SPMT trailers were driven in position under the MSF module.

The load-out of the module

With the SPMTs in position and the hydraulic and electronic systems connected, the module was lifted up from the fabrication supports using the SPMTs’ suspension systems. The site move covered approximately 700 metres in distance to the load out quay, and it was completed the day before the load out onto the vessel took place.

The following day, Mammoet, Aibel and the crew of the vessel carried out the load-out of the module. It took a few hours before the module was rolled onto the vessel and accurately aligned with the grillage.

Shimming and adjusting procedures were undertaken before the MSF module could be completely set down on the vessel. After this, the SPMT trailers were removed from underneath the module.

The mega MSF module has since been shipped to Norway and is now part of Equinor’s fifth platform for the Johan Sverdrup oil field. The oil field is expected to have a daily production capacity of up to 535,000 barrels by the end of this year.