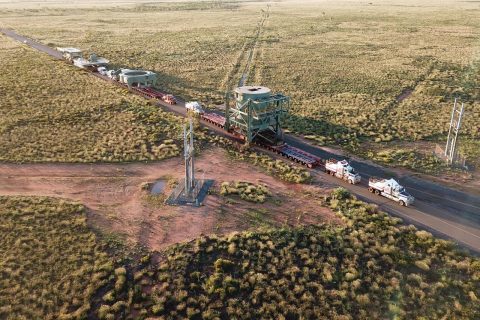 The construction of BHP’s $3.6 billion South Flank iron ore project in the Pilbara region of Western Australia required Mammoet to move over 29,500 tons of equipment. Dutch heavy lifting and transport specialist hauled over a 1000 oversized items 340 kilometres across the state.

The cargo was taken from the ship’s hook at Port Hedland and across a route largely consisting of public highways. Transporting these modules in the largest possible pieces would reduce the time spent integrating them on site – but the maximum transport size is always limited by the width and condition of the route.

The possibilities for what could be transported on this stretch of tarmac were pushed to new limits as Mammoet delivered a 349-ton module comprising the train load out bin gate and HPU module. This was the heaviest load ever carried along this stretch of Western Australia’s Great Northern Highway.

Restrictions were also placed on when modules could be transported, which varied depending on their size: those wider than 8.5m needed to travel at night. Mammoet utilised a specially-built trailer type to minimise the weight of the transport equipment itself and therefore increase the size of module that could be carried.

Overall weight limitations on Australian highways meant a lighter alternative to the traditionally utilised 4-file platform trailer was needed to avoid reducing the size of the modules themselves. Smaller module sizes, of course, mean more transportations – and in turn additional transport and integration costs. Mammoet devised a 3-file trailer solution which allowed the desired size of module to be transported within local regulations.

Delivery of such a large scale of transport work was already a significant challenge within the planned 15-month timescale, but due to delays earlier in the project schedule this cargo needed to be transported in a shorter timeframe. This meant that resources needed to double – and fast.

Another important part of this solution was to increase the number of trailers being used, avoiding the need for them to be reconfigured between journeys, hence achieving a faster turnaround.