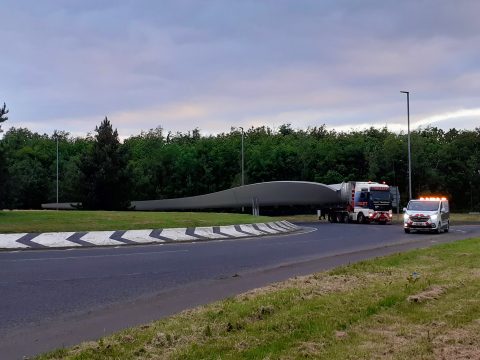 Over a two-month project, a total of 110 Enercon E92 turbine components, including 44.5 metre-long blades were hauled by Collett to the Craiggore wind farm project located in County Derry, Northern Ireland. The preparations, however, began a year before the deliveries could be made.

Collett’s consulting department were contracted to undertake multiple route surveys and produce swept path analysis reports to identify the most feasible route. It was determined the 44.5-metre-long blades would need to contraflow Drumcroon Roundabout and the removal of various street furniture would be required along the route.

Having undertaken all temporary route modifications ahead of the component’s arrival at the Port of Lisahally, over a series of weeks, the Collett team completed all deliveries to Craiggore wind farm, situated approximately 6 miles South West of Limavady in County Derry. In addition to the 110 turbine components, multiple ancillary loads necessary for the development of the wind farm were delivered to the site.

For each of the thirty 44.5 metre-long blades, Collett employed the use of their 3 & 4 axle extendable blade trailers, whilst the 67-tonne generators were transported on 6-axle step-frames.

The tower sections, four for each turbine, required the use of step-frame trailers, with the heavier of the four sections, the bottom tower, necessitating the use of a 3 bed 4 modular trailer to facilitate the 66-tonne loads. Each of the 110 components were delivered outside peak hours, limiting the road traffic congestion and ensuring extensive public safety.