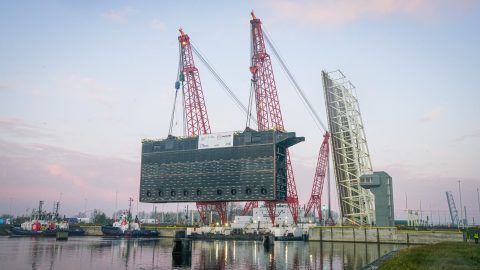 Jan De Nul has reinstalled the second lock gate in the Pierre Vandamme Lock at the Port of Zeebrugge. The operation has been completed one and a half year after the heavy lift vessel Guliver lifted the door from the lock in May 2020 for renovation.

The reinstall has been carried out by Rambiz, which placed the lock gate back in its place. Such a door weighs over 2300 tonnes and has the surface area of a quarter of a football pitch (60 metres long, 24 metres high and 11 metres wide).

“We have been preparing today’s lifting operation for weeks, because restoring the lock gate to the lock chamber is a large-scale and complex operation. On top of that, we had to take the weather into account: enough visibility and little wind,” says project manager Kenneth De Visch.

The floating sheerleg Rambiz, which can lift up to 3,300 tons, took 13 hours to execute this operation. The door was first transported horizontally over land: from the construction site to the quay.

“We are carrying out this renovation in a temporary partnership with Algemene Ondernemingen Soetaert nv, Almex Metaal and Demako nv. First we removed oysters and silt, then we replaced several mechanical parts and installed new technology, such as a compressor and airlift and six agitation screws,” site manager, Wannes Marchand, explains. “In addition, we made several modifications to the steel structure, such as installing four new butterfly valves. Finally, the door was repainted and anodes added, to protect it from corrosion.”

The Pierre Vandamme lock dates back to 1984 and consists of two gate chambers, each with two rolling gates and two movable bridges. Jan De Nul lifted the most seaward lock gate from the lock chambers in 2018 and reinstalled it in 2019 after renovation in the inner port. Now the same procedure was applied to the most landward door.

These works are commissioned by the Department of Mobility and Public Works and are part of the large-scale renovation of the Pierre Vandamme Lock, the crucial access to the inner port of Zeebrugge.