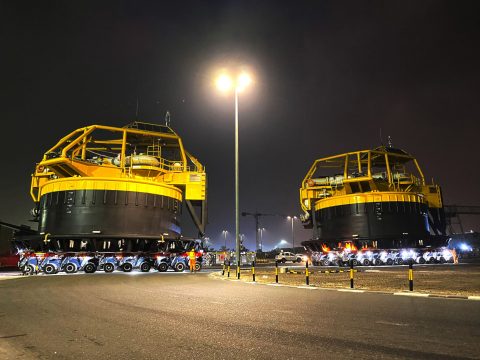 Weighing 334 tonnes, 16 metres long and 15 metres wide the buoys were transported over 700 metres in opposite to the normal traffic direction and 2.5 kilometres overall within the Jebel Ali Free Zone (JAFZA) from Fabtech yard to the general cargo berth.

For this mission Al Faris Group conducted a route analysis in advance and used a new route with road modifications for more efficiency. The oversized loads called for significant road modifications including the removal of sign boards and port berth fence as well as managing temporary traffic routes.

At the berth, the two buoys were loaded onboard AAL‘s 2013-built MPP, the 32,100 dwt AAL Hong Kong. The vessel is part of AAL’s A-Class fleet. The second-generation heavy lift vessel can accommodate all cargo types with a copious intake of 40,000 cubic metres. In combination with a 700 tons maximum lift capacity, five large cargo holds, two flexible tweendecks and a 2,700 square metre weather deck, the A-Class is one of the most popular and versatile multipurpose vessels in the sector.