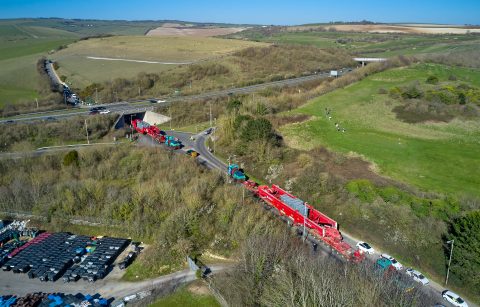 The cargo was delivered in three parts, from Stafford to Ellesmere Port, via sea, then Shoreham Port to Ninfield, Allelys noted.

The first stage of the road transportation was to Ellesmere Port, where one of the units were transhipped onto a 10 axle SPMT using a 200 tonne lift’n lock system. The SPMTs, carrying the transformer, and the girder frame, containing the reactor, were then loaded onto the Terra Marique vessel. To decrease the ground loading pressure during the manoeuvre, Allelys utilised load spreading mats and stools.

The next stage involved the sea transportation to Shoreham Port, where the reactor and transformer were removed using ro-ro operations and were temporarily stored.

The final stage of transportation to Ninfield was the most challenging and saw two girder frames used in convoy, one for each of the units, and configured with low set hangers for the reactor. The two trailers reversed out of Shoreham Port in order to navigate a complex turn onto the A259.

Once through Brighton joining the A27, the team sought a solution whereby they had to travel southbound on the northbound carriageway, before re-joining the A27 by travelling Eastbound on the Westbound carriageway via contraflow, and finally crossing over to the right direction by removing the central reservation. This was necessary to avoid a structure at Patcham Viaduct on the A23.

The next challenge was crossing the River Ouse with such heavy cargo, by closing the A27 and constructing an overbridge to not exert load into the structure, with 27.5 metre bridging mats that were positioned using a 500 tonne and 300 tonne crane lifting in tandem.

Finally it was necessary to navigate the tight streets and turns of Polegate Highstreet and Bexhill in order to reach the final destination at Ninfield Substation.

Once on site, Allelys installed both units. The transformer was jacked up off the transport, jacked down onto skates and then skidded 25m into position. Whilst the reactor was transhipped to SPMT, lifted by Allelys 200 tonne lift n lock system and positioned.

“This operation was extremely complex right from the start, involving several transportation stages and requiring a lot of technical operations to negotiate obstacles and structures on route. From convoying two girder frames, travelling contraflow, removing central reservations and installing overbridges. There were many pinch points along the route that the transport team effectively managed. The level of engineering and planning involved was evident through the successful execution of the project,” said Zac Smout, project manager at Allelys.