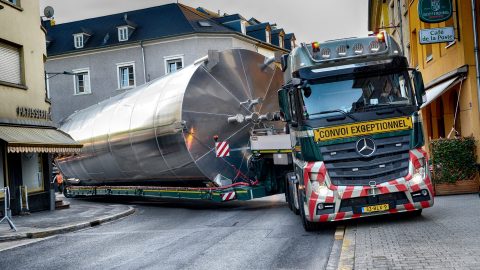 Bolk delivers storage tanks for a chemical plant in Luxembourg

Transport company Bolk has handled the transport of storage tanks from Germany to Luxembourg, using its special vesselbridges. Bolk had the task to move the 20-metre long storage tanks on road and water.

The vesselbridges enabled Bolk to pass under low bridges with the cargo. The vesselbridges were developed over thirty years ago and have been continuously optimised since then. During the year-long preparation and execution, many different things had to be taken into account, such as the tight delivery schedule due to the shutdown of the end customer’s chemical plant in Contern, Luxembourg.

During the project, semi-low loaders were used in the pre-carriage area because of the sharp curves and roundabouts. During final transport, vesselbridges were used to take advantage of their minimal ground clearance due to height restrictions en route and at the plant site.

Because the tourist season was at its peak, this meant that parking restrictions were issued 48 hours in advance, cafés and restaurants had to move their terraces and traffic was diverted. Finally, the very dry summer season and low water in almost all canals and rivers had to be taken into account. The possibility of transferring the tanks and the accessibility of the route to the factory were also decisive factors in the choice of the port.