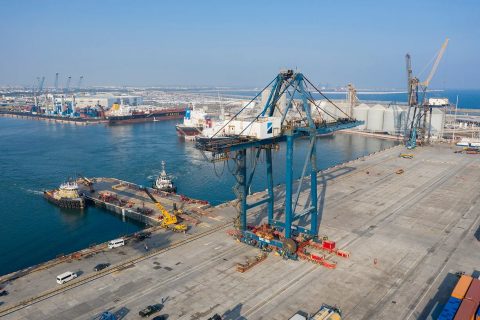 The Dutch logistics giant, Mammoet, has completed the relocation of multiple shipping container cranes, for the specialised container terminal (TEC) Hutchison Ports ICAVE,  as part of the port expansion in Veracruz, east of Mexico City. This is one of the most important maritime infrastructure projects for the country in recent years.

In the first phase of the project, in October 2019, Mammoet transported three Ship-to-Shore (STS) cranes as well as 18 Rubber-Tired Gantry cranes (RTGs). The STS crane weighed about 1238 tonnes, and the heaviest RTG weighed approximately 179 tonnes. Eight of the RTGs and the heaviest STS crane were moved by being loaded onto two trains of 28 axle-lines of Self-Propelled Modular Transporter (SPMT), then rolled onto a waiting barge, and sailed four miles, from the old port location to the new one. Once at the expansion location they were offloaded and ready to use. The remaining STS cranes and RTG cranes were transported in December. This investment of approximately 31 billion pesos ($1.6 million), tripled the port’s capacity.

In the second phase of the project, Mammoet employed 56 axle lines of SPMT for the transportation of two STS cranes, and ten RTG cranes. Once completed, the crane relocations increased port capacity to over 95 million tons. The load was split into two shipments to reduce the required working window from four days to two days for each trip,  for a safer and more efficient offload schedule. This was due to the seasonal ‘North Winds’ of November to February, that can reach 120kph, and last two to three days.

Finally, in April,  Because ICAVE needed to have an 735t STS crane moved to have it safely decommissioned, Mammoet completed the loading and transport of an STS crane with 46 axle-lines of SPMT, topped with modular transport beams.