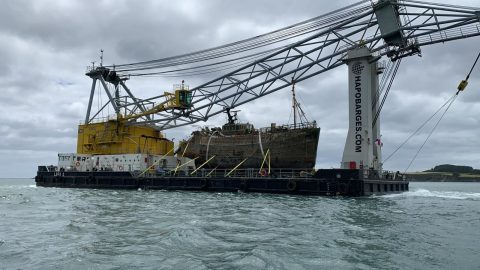 Dutch maritime equipment supplier, HAPO International Barges executed a wreck removal and transport for KOOLE Contractors. The Sceptre, a fishing trawler vessel, sank at Keelbeg Pier, in the Irish county of Cork, in early February of this year. After removal, it was transported to Scotland. The operation went without a hitch.

It was reported that the 23-metre trawler had been berthed at the harbour for five years, unused, before the sinking, and that no crew was onboard the vessel at that time. The cause of the sinking remains unclear. Immediately after the sinking, the Cork County Council convened an oil-spill assessment team, due to concern over leaking diesel and hydraulic fluid. The area around the hull was sealed off to contain pollution risks, and absorbent booms and pads were placed around the almost entirely submerged wreck.

Following a few days of preparation, including diving surveys, it was a matter of getting the slings around the hull of the Sceptre’s wreck, and pumping it empty, before lifting it out of the water at Keelbeg Pier. Including the divers, project team and crew of the Lara 1, this project involved approximately 14 people.

The HAPO International Barges project team then proceeded to sea fasten the wreck for transport to Scotland. It was shipped to the UK dry-dock specialists, Dales Marine, for decommissioning, in Greenock. Greenrock is situated 40 kilometres west of Glasgow, at the mouth of the River Clyde. Dales Marine is one of only two Scottish companies on the European Commission Ship Recycling Register.