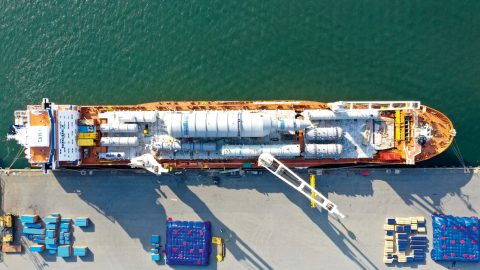 Freight forwarding and project logistics specialist Deugro has completed yet another project, delivering 35,541 freight tons of project cargo from South Korea to Russia, via the Northern Sea Route.

The company released a case study on the project that saw the delivery of 45 oversized and heavy lift (OSHL) pieces, including a 597-metric-ton reactor with dimensions of 44.5 x 11 x 10 meters and an ethylene fractionator weighing 357 metric tons with dimensions of 81.93 x 8.1 x 6.9 meters. The units were transported simultaneously on two fully chartered heavy lift vessels for the Irkutsk ethylene and polypropylene plant. The project was executed in close cooperation between deugro (Japan) Co., Ltd., deugro Projects, LLC, Russia and deugro (Korea)

The cargo was moved from the cargo marshalling yard in Masan, South Korea via Tiksi in the Arctic Ocean to Ust-Kut, Russia. The heavy lift vessels chartered by BigLift, were accompanied by the nuclear ice breaker Yamal for the Northern Sea Route (NSR) passage to ensure a safe delivery of the valuable cargo at the Port of Tiksi. The total distance from Masan to Tiksi and the subsequent barge transport across the Lena River to Ust-Kut was over 6,450 nautical miles.

The first joint study with the client took place in 2016, whereby deugro prepared a survey and supported the project owner in determining the right location for the construction of the jetty on the Lena River. In close cooperation with the client, several road surveys were conducted to transport the 45 OSHL pieces from the Port of Tiksi via the Lena River to the project site in Ust-Kut.

As most of the OSHL cargo came from South Korea and the transit time to Tiksi via the Bering Strait was the fastest, it was consolidated and loaded at the port of Masan. To avoid any unnecessary double handling of the cargo and to save costs, 17 OSHL units from China and Japan were loaded onto the same heavy lift vessel to Masan, which had already been chartered. Stowage plans and loading sequences were decided well in advance according to the barge stowage and discharging sequence onto the barges at Tiksi.

Project cargo transshipment at the Port of Tiksi

After 4,500 nautical miles, both heavy lift vessels arrived punctually at the anchorage points in Tiksi, so transloading of cargo from the vessels to nine separate barges could be executed according to schedule within six days.

The transshipment in Tiksi was executed outside the port area due to a low draft at the Port of Tiksi. The sensitive cargo units were discharged simultaneously from the heavy lift vessels by using on-board cranes with a combined lifting capacity of up to 800 metric tons.

The shunting tugs moved the empty barges over 35 nautical miles from Bykov Mys, the mouth of the Lena River, to the loading point in Tiksi. Each time three barges were loaded, one tug towed them back to the mouth of the river where they waited for further transportation.

After discharge was completed in Tiksi, the barges, which are certified for an exit to the sea, started their voyage to Ust-Kut. The voyage of each barge took about 24 to 26 days per barge.

From barge to road

The final destination for the barges was the Ust-Kut jetty, where the discharge operation for road transportation started. All units with a length of over 40 meters or a weight of over 220 metric tons were unloaded in tandem lift by
two LR-1750 crawler cranes with a combined lifting capacity of up to 1,500 metric tons.

The distance from the jetty up to the job site was about nine kilometers, including about two kilometers on the Viluy federal highway. The rest of the distance was covered on a separate road that was built especially for this purpose.

The OSHL units were moved by Self- Propelled Modular Transporters (SPMTs) assembled from four-axle and six-axle modules.

The 81.7-meter-long fractionator was moved by SPMT with turning tables, the 60 to 200-metric-ton units by non-self-propelled multi- axle THP trailers, and units under 60 metric tons by three to six-axis semi-trailers.