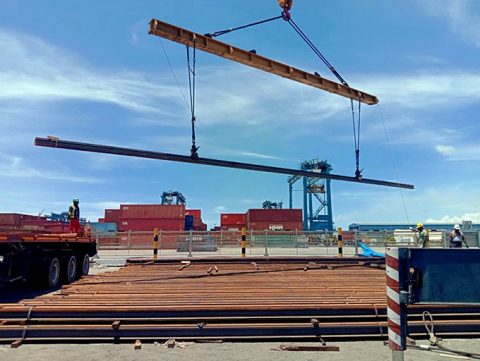 A total of 6,099 metric tons of rails have been delivered from Kattupalli Port in Chennai, Tamil Nadu, to Bengaluru, Karnataka, for the Bangalore Metro Rail Corporation Limited. The 1875 bundles of rails, 18 metres in length have been transported by Express Global Logistics (EXG).

The movement was critical because the requirements listed by the RDSO (Research Designs and Standards Organization – Indian Railways) were to be implemented during the operation. The engineering team ensured the in-depth inspection took place at the site before the unloading of the cargo.

To ensure the highest safety standards, the lifting beams and rail clamps were fabricated well in advance to allow safe cargo handling and avoid any damage. To mitigate the traffic delays and constraints of moving the cargo during the day in Chennai, the team sought relevant road permissions to coordinate the entire movement during the night.

Bangalore Metro Rail Corporation, a joint venture of the government of India and the government of Karnataka, entrusted with the responsibility of implementation of the Bangalore Metro Rail Project. The later named Namma Metro has two corridors. The East-West corridor, which is 18.1 kilometres long, starts from Baiyappanahalli in the East and terminates at Mysore Road terminal in the West. The North-South corridor, which is 24.2 km long, commences at Nagasandra in the North and terminates at Puttenahalli in the South.