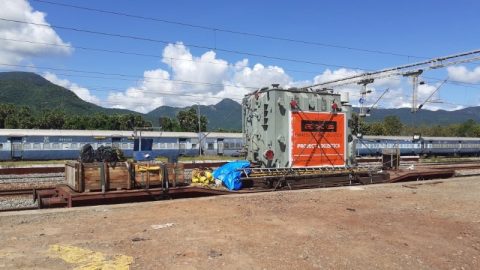 EXG takes project cargo on a 1,800 km journey across India

Vishvendra Singh from EXG said, “The project was challenging as the cargo was initially transported on 6-axles for 1,773 kilometres but beyond this, movement was restricted due to the ghats so we had to switch to rail.”

The company faced a new challenge 25 kilometres before the Srungavapukota (Skota) Rail Station as the main unit had to wait for three days for all the accessories to arrive and be offloaded before moving through a single and narrow approach road only 3.5 metres wide in order to facilitate a seamless rail movement with all the cargo.

Then, the entire consignment had to be manually offloaded and a 40-metre dragging operation was put into place for loading the cargo on a ramp and eventually onto a wagon at Skota Rail Station in Andhra Pradesh. Singh added that the company had to manage multiple railway shutdowns to safely and successfully load and unload the consignment on and off the railway wagons. The team also had to carefully navigate the last leg of the rail movement covering 23 kilometres through 13 tunnels by securing the cargo and keeping its height in check.