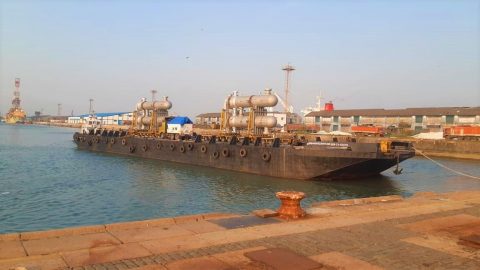 Mumbai-based freight forwarder Total Movements has completed another multimodal transport of project cargo for a major project in Asia. The company moved a pair of Nos feed effluents with a height of more than 7 metres and about 700 freight tons from the supplier’s plant to the load port on the west coast of India.

Internal shifting within the plant, road transportation from the supplier’s plant to the nearest jetty, barging to the nearest major seaport, and feeding alongside the vessel were all part of Total Movement’s scope for the project.

A peculiar challenge was the fact that the cargo COG (centre of gravity) was higher than usual. Furthermore, the nominated loading jetty was a tidal jetty, which necessitated special pilotage and mooring arrangements. This required Total Movements’ engineering/execution team to make site visits, detailed discussions with multiple stakeholders, technical simulations, in order to execute the movement.

The transport comes only a couple of weeks after the company moved two 552 mt MDEA contactors, each with a length of 44 metres, from the supplier’s site to the load port on the west coast of India. The contactors were loaded onboard the 2010-build Type 116 heavy lift vessel Amoenitas, owned by SAL Heavy Lift, part of the Jumbo SAL Alliance.