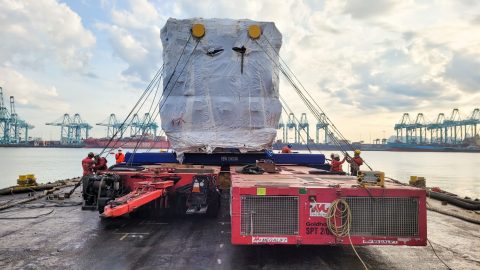 Malaysian OOG cargo transporter Megalift has handled the delivery of a 265-ton transformer from India to Jurong Port, Singapore. The transformer with a length of over six metres has been delivered for the Tanjung Bin power plant T4.

Owned by Malakoff Corporation, Tanjung Bin Energy facility, known also as T4 has a production capacity of 2100 MW, and has been expanded by a 1,000 MW coal-fired unit. Megalift has been hired to arrange the freighting of the 265-ton cargo.

After arrival at the Juron Port, the company performed a double banking to discharge the cargo onto a barge from the transport vessel. The barge was then sailed to Tanjung Bin power plant’s inhouse jetty for the company to roll it off and transport the transformer to its final delivery point.

Transporting the unit on inland waterways was selected as the road transport was not feasible. There was no way the cargo could pass through the narrow pathways in the villages of Tanjung Bin.