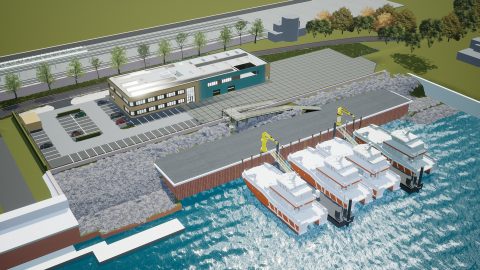 North Sea Port is building a quayside and docks for Ørsted’s new maintenance base in Flushing, which the energy company will use for its planned offshore wind parks Borssele 1 and 2.

The quayside will have a length of 100 meters and will accommodate two floating landing stages with mooring capacity for four ships to bring staff and materials to the offshore sites. Works have commenced in April and will be completed at the end of the year.

Ørsted started works on its new maintenance base in December 2018. When finished it will accommodate 50 to 100 workers.

The offshore wind parks Borssele 1 and 2 are expected to be finished in 2020, with flexibility of one year. With a total 94 wind turbines of 8 MW each, the wind parks together will generate 752 MW of electricity a year. That is enough to power one million households, Ørsted states.

In October, Ørsted contracted dredging company Van Oord and offshore constructor GeoSea to build the two wind parks. GeoSea has been awarded the contract for that transportation and installation of 94 foundations and turbines, while Van Oord is contracted to transport, bury and install the inter-array cables which have a combined length of 167 kilometers.

The turbines will be delivered by Siemens Gamesa, but the order for the foundations has been divided over Sif, EEW Group and Bladt. Sif and EEW SPC will both deliver half of the 94 monopile foundations, while Bladt and EEW OSB are contracted to deliver 35 transition pieces.

Henrik Egholm, Ørsted’s EPC contractor for Borssele 1 and 2, said: “With Sif, EEW and Bladt we have a strong mix of local and international suppliers. We are very pleased to for the first time with Sif, as it is a competent and experienced Dutch supplier.”

Sif is a Dutch foundations supplier with construction sites in Roermond and Rotterdam. The foundations for Borssele 1 and 2 will be built at their new facility on Maasvlakte 2 in Europe’s biggest port. Richard Jongen, Commercial Manager Wind at Sif, was happy when the company won the contract in October last year. “This is the first time Sif is going to manufacture the offshore foundations for a wind project on behalf of Ørsted’, he said.

At the beginning of March of 2019, the company announced it will expand its terminal in Rotterdam with new coating facilities, which are necessary to better protect the offshore foundations for corrosion. From 2020 the site in Rotterdam, which currently serves as an assembly facility, will also start with the construction of large diameter foundations.

Timelapse of the Alpha station loadout. 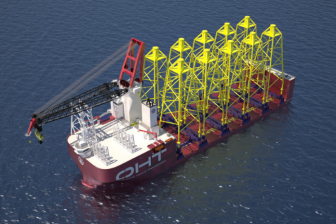 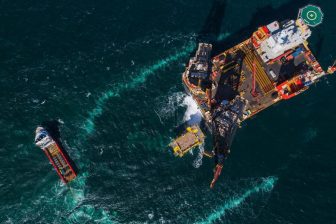