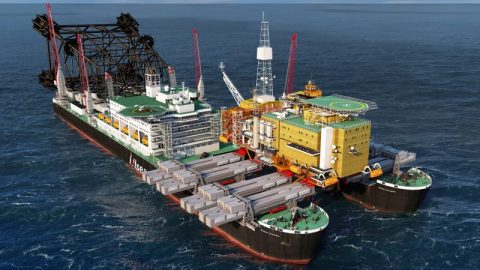 Allseas has won a new decommissioning contract from Equinor Energy to remove the 48,000 tons weighing Statfjord A platform. Allseas’ flagship Pioneering Spirit will lift the topside from its concrete gravity-based substructure in one piece after 2022.

The company of Dutch engineer and inventor Edward Heerema is pleased with the new contract. “This award underpins the very philosophy of Pioneering Spirit, and the rationale of bringing her into the market,” the company writes in a statement.

One of the largest platforms on the Norwegian continental shelf, Statfjord A stands in 149 metres of water in the centre of the Statfjord field, which is located in the northern North Sea, approximately 120 miles west of Bergen. The 84 metres long and 54 metres wide topside has a weight equal to Pioneering Spirit’s single-lift capacity.

Prior to the lifting operation, Allseas will increase the capacity of the vessel’s motion- compensated topsides lifting system from the current 48,000 tons to an even larger capacity in order to take into account any weight deviations.

Once removed, Kvaerner AS will demolish the topsides at its Stord disposal facility on the west coast of Norway. The topsides will be transferred from Pioneering Spirit to Allseas’ special-purpose cargo barge Iron Lady, capable of bearing the topsides’ enormous weight, for towage to the yard and skidding onto the quay.

The Pioneering Spirit has executed contracts for Equinor before. Last year, the vessel was also used to install a platform for the Norwegian oil company, the Johan Sverdrup topside.

The Pioneering Spirit, which was specifically designed for platform removal, has already carried out several large decommissioning contracts including the removal of the Yme-platform, which was scrapped at Veolia’s decommissioning site on the island Lutelandet, and the removal of the Brent-platform topsides for Shell. The ship is currently carrying out pipe-laying operations for the Nordstream 2 project, which will supply the Baltic region and Germany with Russian gas.