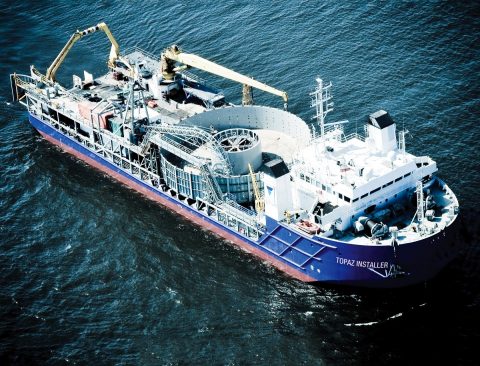 DP World has bought offshore logistics provider Topaz Energy and Marine for USD 1,079 million. With the acquisition, the Saudi-Arabian terminal operator wants to strengthen its position in maritime logistics services and explore new business areas, like increasing transit volumes through Azerbaijan within the East-West trade corridor.

The company predominantly operates in the Caspian Sea, Middle East and North and West Africa regions. The group has a particularly strong position in its core Caspian Sea market, which is considered a strategic oil base and holds about 6 per cent of global oil reserves. The Caspian basin is characterised by long-term contracts and high barriers to entry.

As of the 31st of March, Topaz’ contract backlog had a value of USD 1.6 billion, which according to DP World, far exceeds industry benchmarks.

DP World states that the transaction supports its objective of increasing the company’s presence in the global logistics and marine services industry.

“We are pleased to announce the acquisition of Topaz, which further strengthens DP World’s position as a world-leading operator in maritime logistics services. In recent years, we have been investing selectively in the marine logistics sector in companies with high revenue visibility, consistent track record and strong customer relationships. This latest acquisition complements the operations of our P&O Maritime Services (POMS) business, which maintains over 300 vessels globally. Furthermore, this new partnership opens the door for DP World to explore new business areas more extensively, for example, increasing transit volumes through Azerbaijan within the East-West trade corridor,” said Sultan Ahmed Bin Sulayem, Group Chairman and CEO at DP World.

Topaz CEO René Kofod-Olsen also expressed he’s pleased with the agreement. Topaz expects the deal to bring greater financial strength and allowing increased investment both in the fleet and in technology and innovation.

“This is an excellent deal for our employees and customers. Being part of a world-leading group such as DP World ensures that we will continue to be an employer of choice for talented individuals and will bring greater strength and benefits to our customers,” Kofod-Olsen said.

It is the second large acquisition that DP World has announced in a relatively short period of time. In August last year, the company announced it had acquired European shortsea and feeder operator Unifeeder. The acquisition shocked the container industry as it was the first time that a container terminal operator bought a container shipping company. According to analysts, it was a strategic move to help secure future container volumes for its terminals. First of all, DP World did not have direct ties with a major shipping line while many competitors do. And secondly, now that containerships have gotten so big that only a number of terminals can handle them, good shortsea and feeder connections are becoming increasingly important. With the leading European shortsea container shipping company in its portfolio, DP World will be able to offer these services like no other.