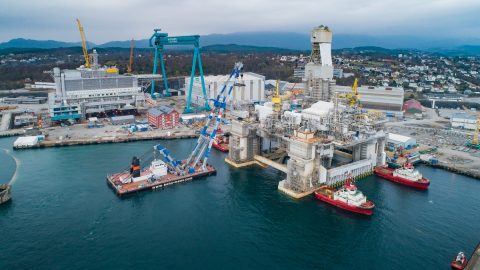 Kvaerner reports high revenues but warns for lower rates in 2020

Norwegian EPC-contractor Kvaerner has booked high revenue and order intake in the third quarter of 2019. However, CEO Karl-Petter Løken warns of a poorer year ahead.

The company’s order intake in the past quarter is also higher than last year with bookings reaching a total value of USD 198 million, which is USD 74 million more than in the same period last year. Measured over the first nine months, however, this year’s order intake is down from USD 1.15 billion to USD 903 million.

“The revenue level in the third quarter reflects that several projects are in a period with a high activity level. When evaluating Kvaerner, it is relevant to not only consider individual quarterly results, but primarily look at the longer lines in the company’s performance. I am pleased to say that we are on track with our strategy for expansion of Kvaerner’s business to annual revenues above NOK 10 billion. However, we expect that revenues and margins will decrease for the full year 2020 before we anticipate to see the start of the planned growth from 2021 and onwards”, says Løken.