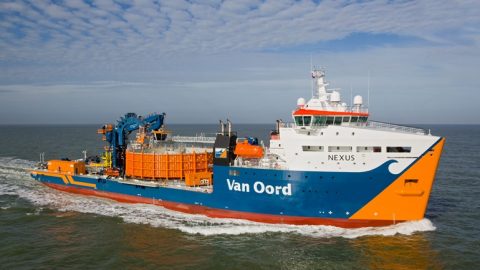 Van Oord under fire for involvement in controversial Angolan project

Dutch offshore contractor Van Oord has come under fire for its involvement in an Angolan city development project for which three thousand families were violently moved out of their homes. The company says it was not aware of any sort of violations.

The project in question is the Marginal da Corimba city development project off the coast of Luanda in Angola. Van Oord was contracted for the design and construction of new land to extend the city by around 400 hectares.

To make room for the project, inhabitants of the coastal suburb Areia Branca were violently relocated by the Angolan police and army, eyewitnesses have told international media working together on the case.

To force people out of their homes, the police cut of food and water supplies, abused and hit civilians and used teargas and water cannons, locals tell Dutch newspaper Trouw.

Trouw is one of 37 newspapers worldwide that are working together on the case with the International Consortium of Investigative Journalists, who were tipped by the African whistleblower’s platform PPLAAF. Other newspapers involved include The Guardian, Le Monde and The New York Times.

In a statement, Van Oord says it was unaware of any violations or incidents linked to the project, which had a contract value of 615 million dollars. “As is customary and in accordance with its own compliance regulations, Van Oord conducted due diligence on its own behalf as well a third party conducted due diligence into the consortium partner. At that time these investigations gave no grounds for not proceeding with the project”, the company states.

The offshore contractor was not the only Dutch company involved. ING Bank and insurance company Atradius also contributed to the project. ING Bank lent the Angolan government 400 million dollars to finance the project, while Atradius provided insurance for the sum.

The companies worked together on the project with Urbinveste, an investment company of Isabella dos Santos, the daughter of the former president of Angola.

Dos Santos is surrounded by controversy and stories of corruption. According to the International Consortium of Investigative Journalists (ICIJ), Dos Santos has misused her position as the president’s daughter to enrich herself. Her current worth is estimated at 2 billion dollars. However, following a change of presidents in September 2017, she’s now being investigated for corruption.

Despite the controversy surrounding Dos Santos, Van Oord transferred substantial amounts of money to the bank accounts of her investment company, Urbinveste.

Business experts who’ve seen the confidential documents that are in posses of the ICIJ, feel Van Oord, ING and Atradius have not done enough to prevent corrupt payments to Dos Santos and ignored major red flags. “It is completely unclear if Urbinveste has delivered any service in exchange for the payments. I would not have signed this contract”, Leen Paape, professor corporate governance at Nyenrode Universiteit told ICIJ and Trouw.

Following the appointment of João Lourenço as the new president in Angola in September 2017, the government has vowed to tackle corruption. As part of that campaign, the government in May 2019  cancelled all the contracts for the Luanda project that were signed in 2016, including the contract between Van Oord and Urbinveste.

According to Van Oord, the new Angolan government has indicated that it would like to continue this project with Van Oord and the company says that talks are currently in progress.

Meanwhile, the Dutch Minister for Foreign Trade and Development Cooperation, Sigrid Kaag, has announced she wants to speak to Van Oord and demands further explanation.

In its statement, Van Oord says it is fully committed to international law and regulations, including the OECD guidelines. “Van Oord condemns the practice of forced evictions without compensation and states that the people who were forced to leave their homes at that time should receive compensation”, the company states, adding that it’s ‘committed to using its influence to bring this about.’