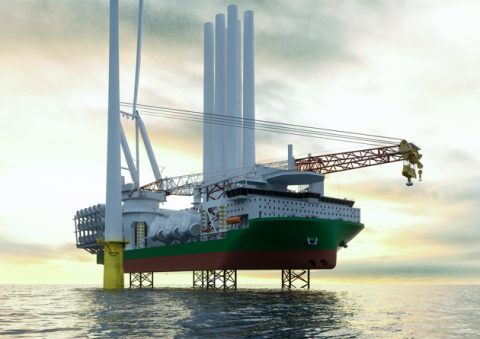 The design features a jacking deadweight of 18,000 tonnes, 6,800 square metres of cargo deck area and a 3,000-tonne main crane. In addition to being able to carry the latest generations of wind turbines, the jacking deadweight and crane capacity also enable the vessel to carry at least four of the extra-large monopile/transition piece foundations, which are required for the 14–16 MW turbines.

The Atlas C-Class is intended as a platform to form the basis for further customisation according to clients’ objectives. Cranes, thrusters, generators and jacking systems can all be modified and selected based on manufacturer availability such that the vessel can be tailored to suit individual needs, Knud E. Hansen states.

Energy savings and low emissions have been key drivers for the propulsion system. The vessel is powered by eight identical generators, each with 3340 kW of electrical power, which are arranged in two independent engine rooms. A DC grid system allows the engines to run at variable speed for maximum fuel efficiency. The DC grid system is coupled to a 4 MW battery pack for load levelling and peak shaving.

The batteries can supply “instant power”, which reduces the need for “spinning reserve power“ from generators running on standby (e.g. during DP operations). According to the ship design agency, they also make it possible to recover approximately 60% of the energy that is used to jack the vessel to the operational height.

Negotiations are currently ongoing with companies in the offshore wind sector to further develop the Atlas C-Class platform based on their individual requirements. It is the first in a series of planned WTIV platforms of varying sizes. One of those already under development is a smaller A-Class platform that can carry four 14 MW turbines and is equipped with a 1,600-tonne crane for clients who require a smaller variant to install wind turbines on pre-installed foundations. 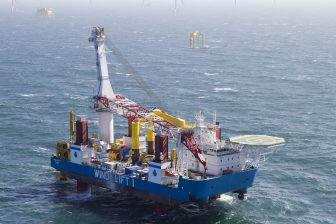 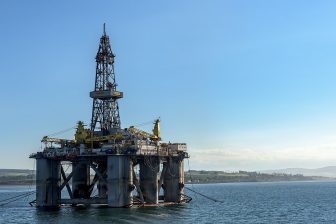 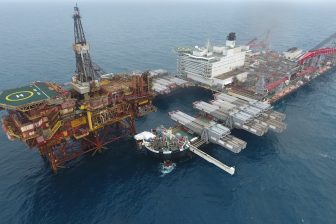 Pioneering Spirit to remove two platforms in the Irish Sea