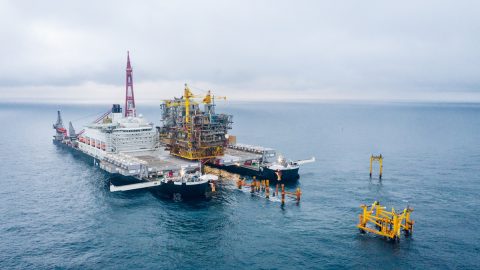 [VIDEO] How the Pioneering Spirit removed 27,000 tonnes of steel from Danish waters

During last summer, Allseas sent its mega heavy lift vessel Pioneering Spirit into the Danish part of the North Sea for a processing and accommodation topsides and flare jackets removal campaign. In total, 27,000 tonnes of steel were removed. Allseas has now released a video in which the project team explains how they executed the project.

The removal was part of the Tyra Redevelopment Project for Total E&P Denmark. Within less than two weeks, the structures had to be removed and transported 2000 miles to disposal yards in Denmark and the Netherlands for recycling.

The project involved multiple lifts of diverse structures weighing between 14,000 and 900 tonnes. Allseas had to mobilise several vessels to get the job done, but the biggest role was for the Pioneering Spirit. The project team explains in the video that the first step involved detailed analysis and engineering followed by developing the procedures for the removal of the platforms and jackets. Later on, came the offshore preparations, which included the cutting of the legs.

As the platforms were very low in the water, the Pioneering Spirit had to ballast to its deepest draught to get under them. First, two smaller structures were lifted onto the aft of the Pioneering Spirit using its 5000-tonne crane. The vessel then turned around to position itself around the larger topsides to deploy its unique motion compensated topsides fast lift system. Once lifted, transport could begin.

The video below, in which the project team tells more about the project, shows how the lifts were executed.